An impressive video resume can help a candidate’s chances at a job. 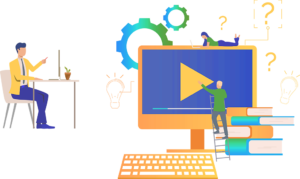 That’s the general consensus in today’s corporate world among employers and there are several reasons why this is so. First of all, video resumes, while becoming more common, are still not nearly as common as the standard resume and cover letter that’s either sent via snail-mail or e-mail, so it shows a bit of innovation and outside the box thinking on the job prospect’s behalf, as well as a familiarity with web and video technology. And let’s face it – in today’s world, employers aren’t just looking for people that can do a job well, but people that can do a job exceptionally well. Video resumes show that prospects aren’t afraid to take a chance at a new way to do something, which can sit well with employers and recruiters – especially if the video is especially creative and original.

Another – and perhaps even more important reason – why employers are beginning to accept video resumes is that it’s somewhat of an unofficial first interview. Rather than looking at a piece of paper highlighting a prospect’s qualifications, the employer is able to see and hear the individual speaking about it themselves. It show employers how well someone handles themselves and if a prospect is presentable, in addition to his or her qualifications. This alone can help an employer determine if they want to hear more about you in a “real” interview.

So if you’re considering making a video resume to use on your job search, it certainly can’t hurt your chances, especially if you’re applying for a job where you’ll routinely be using video cameras and editing equipment. However, we’d also advise you to send in a more traditional resume as well. Think of your video resume as a complimentary offering to your traditional resume. Remember – an impressive one can greatly help your chances at landing the job.

Bring your resume to life!

Top 5 Valuable Tips to begin the Hiring with Social Media!